It should be obvious to anyone following this series (so… just me) that I failed at my Drawlloween attempt. I have mixed feelings about that. On the one hand, I hate not living up to the expectations that I set for myself. On the other hand, it was a learning experience! Two key takeaways:

I’m running a D&D campaign this week, so I may use the remaining prompts as monsters for the players to encounter. It depends on how well they would jibe with the rest of my plans. We’ll see.

In conclusion, I would try another themed challenge, but I’d be more careful about tweaking it to suit my strengths and creative inclinations.

It turns out that doing a challenge that requires you to draw a lot, when drawing isn’t your natural medium, is difficult??? Who could have predicted such a thing!

Instead of catching up properly, I’m going to write little vignettes for each prompt. Undeniably, I’m taking a shortcut. My justification is that, uh… cheating is okay, because… fine, I don’t have a good excuse. But I’d rather complete the challenge in some form than drop it altogether!

To add another dimension of meaning, I added a Tarot card to each prompt. I used Tarot by Seven’s Deck of the Bastard — third edition, Samhain version. That one isn’t available anymore, but the standard version and a 2017 Samhain version are still for sale. The Deck of the Bastard’s aesthetic is appropriately spooky, plus the cards have helpful interpretation hints written on them.

Without any further ado…

The elders tell you, when you come of age, that seduction is one of our ancient arts. The tell you that humans are unable to resist the wiles of a vampire, that your ineffable scent and eldritch grace are enough to disarm the survival instincts that our prey have honed for millennia.

Well, apparently the elders forgot to remind the humans. Here I am, lightheaded with thirst, while the women at bars stare at those damn portable screens. The veins in their necks throb with blood; I can hear their heartbeats.

And yet I keep striking out. What’s a vampire gotta do to attract a victim these days?

Do not call up what you can’t put down. I’ve done it before and honestly, it was a huge hassle. You try explaining to the senior sorcerer that an entire demon horde is wrecking their workshop as you speak! And no, you don’t have time to explain, because the ancient evil needs to be banished right now.

This time around I had a coffin cage prepared. Plus I was in my own workshop — I’d saved up enough gold to rent one. As I spoke the final incantation, the spirits began to rise from my pentagram in a whirlwind of acrid smoke.

“Into the coffin!” I cried, directing the demons with my staff. They surged toward it and slowly settled into the kernels of frankincense that I’d heaped within. (The materials for this spell were nearly as expensive as the workshop space.) Coils of grey smoke hovered above the frankincense.

“I bind you to this substance,” I commanded.

Yep, it definitely was.

“This could be a problem,” I muttered. But I was so sure that I’d enchanted the coffin cage correctly!

The music of the Danse Macabre
calls out to every corpse.
Follow, follow the candelabra,
its eerie light and sparks.

The bones are rising up again.
Soon they’re shedding flesh.
Clacking as they weave and spin,
unable now to rest.

The dead are dancing, dancing on;
respite from hell is brief.
Skeletons, back to the grave by dawn.
We living keep our grief.

Two of Wands reversed — miracles, fear of the unknown

The owl lay still on his porch. The first thing he noticed was the softness of her shape. But when he reached down to touch the body, it was stiff with rigor mortis beneath the feathers.

“Oh no,” he whispered to himself.

What would make an owl die suddenly? Did owls fly into windows? John had never heard of such a thing happening, but he was still new to country living.

The owl’s eyes were tightly closed. Nevertheless, John marveled at her distinctive features. With the pad of his forefinger, he touched the beak, feeling its rigidity.

Beyond the porch, pine trees bowed their tips as they leaned with the wind. John looked up at them, suddenly shivering. The dead owl has been such a surprise that he hadn’t grabbed a coat.

The bird once lived in those trees, so close to his home. And yet John could not recall hearing the melodies of her kind.

Goblins don’t excel at etiquette. They hardly try to, although limited manners can be taught if you catch the creature early. Why bother trapping and training a goblin? Well, fashion is fickle. The latest crop of the upper crust has decided that goblins are not horrible little mongrels.

Rather, goblins are amusing companions to show off at dinner parties! Clearly! Supply for yourself the image of me rolling my eyes.

When I first heard of the trend, I knew that a man with my skills could milk the opportunity. Now I make too much money in this business to switch markets. Please, ask me who I detest more, the fetid goblin whelps or the simpering socialites who buy them.

The fiend lies on the floor, convulsing. The moon has been full and swollen for a week. No werewolf can sustain its madness throughout seven whole days. Seven bright-lit nights — unrelentingly bright and clear nights.

The canine’s body consumes itself. Its flesh degrades minute by minute.

Horribly, the werewolf howls. This howl is not the lusty one emitted by wolves for centuries, for eons. The sound does not evoke fear. Nor does it rouse a listener’s pity. Any human present to witness this creature would be purely revolted.

The blue-white moon shines on, glinting against the werewolf’s wretched fur.

The pitter-patter of little feet.
It is no child that passes here.
The teeming rats are driven to eat.
A ballet swarm, it disappears
when confronted by the master.
The thrall of his harnessing charm
melts the thronging masses faster
than rats can squeak their wild alarm.

The blind seer gestured abruptly to her servant. He sprang to her shoulder, bearing the stone bowl. Eli surveyed the audience as he moved, and noticed their eyes. Each pair followed the motion of her arm, briefly rested on him, and then jerked back to her face.

The seer’s eyes were closed. Her face was creased in seeming ecstasy.

Eli knew this game. He was familiar with the entire routine, including the dramatic way she beckoned him. Not because their ritual was rehearsed, but because its requirements were deeply ingrained in her. And through her, ingrained in him.

The snake writhes around your finger,
an ending grace.
The grace that terminates.

Small dragon
of an ancient pattern.
Its body is rough against your skin.

The call of eons past
captured
in your fascination.
Captured by the creature’s own
ability to capture.

The humans might have imagined that their conquerors would feel remorse. If the humans remained to do any imagining, that is. But they didn’t, and the emissaries of a foreign civilization rejoiced in their absence.

What did the new lords of the planet see? Possibility. They’d found a wasteland to be rejuvenated, and they had cleared out the resident vermin. Homo sapiens hadn’t done wrong, exactly… not by the species’ own criteria.

The aliens liked their new property, but its previous tenants’ preferences were distasteful. Remodeling proceeded swiftly, and it was glorious.

When a pumpkin rolls down a hill,
bumping against grass tufts and dirt ruts,
it expresses the gravity of God’s will.
The divine has proved to be a klutz.

When a pumpkin crashes to its end,
against a boulder, conveniently placed,
its guts are spilled, thus to send
out seeds and nourishing orange paste.

Medusa stares into the mirror. She is the only one who can regard herself this way, head-on. Even her sister Gorgons turn away. Is their caution borne of respect? Perhaps fear? Medusa does not recognize the distinction. On her island, solitude is a strength, however excruciating.

Medusa reaches toward the mirror and traces her reflection. Her fingers are long, extensions of fine-boned hands. Everyone turned to see her beauty in years past. No, that is a distortion. She was pretty. Never beautiful.

Fond memories are to be acknowledged and dismissed. Medusa does not allow the bittersweet pangs, which border on regret, to usurp her pride. The queen of serpents must recognize her power… or it will dissipate.

Of course it will. The sky always falls. The sky has fallen, the sky falls, the sky will continue to fall.

It is morning. Hard yellow sunbeams bear down on the people, and heat pulls sweat from them. The crowd is redolent with soup smells and oily perfume.

Their refrain grows, it multiplies, it becomes louder and larger. Fluffy mounds of clouds that were once calm are twisting and dissipating.

Above the human clamor, expanses of blue turn toward grey. Then indigo. Soon true darkness begins to spread and subsume the daylight.

A red, angry moon fades into view, first rising gradually. Its ascent accelerates. The crowd becomes frenzied as the moon crests the horizon and its bloody color intensifies.

I got very behind on Drawlloween. So this afternoon I spent some time sketching in an attempt to catch up. Currently I’m not planning to finish these drawings. I suppose that’s fine since the whole exercise is for my own pleasure anyway.

Drawing by hand is still much easier than drawing on the computer, despite my lack of practice! 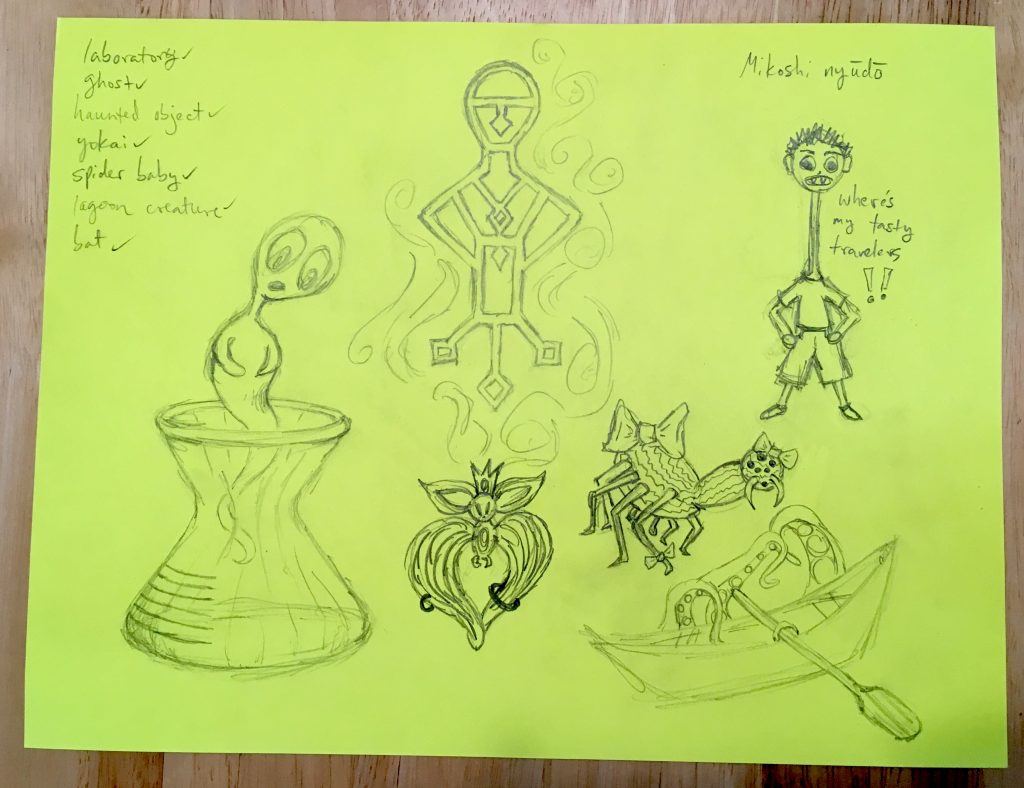 Found on the page above:

The prompt was “mushroom,” singular, but I drew multiple. This is the first Drawlloween picture that I’ve totally freehanded. I’m happy with the color palette!

ICYMI, here’s the explanation of Drawlloween.

The third prompt was to draw a cryptid. I stitched together two free bases, by DeviantArt users bardokks and dergenn. My creation is… the dreaded mouse raptor! A beastie who terrorizes nearby villages and the like. You know, typical cryptid activities. 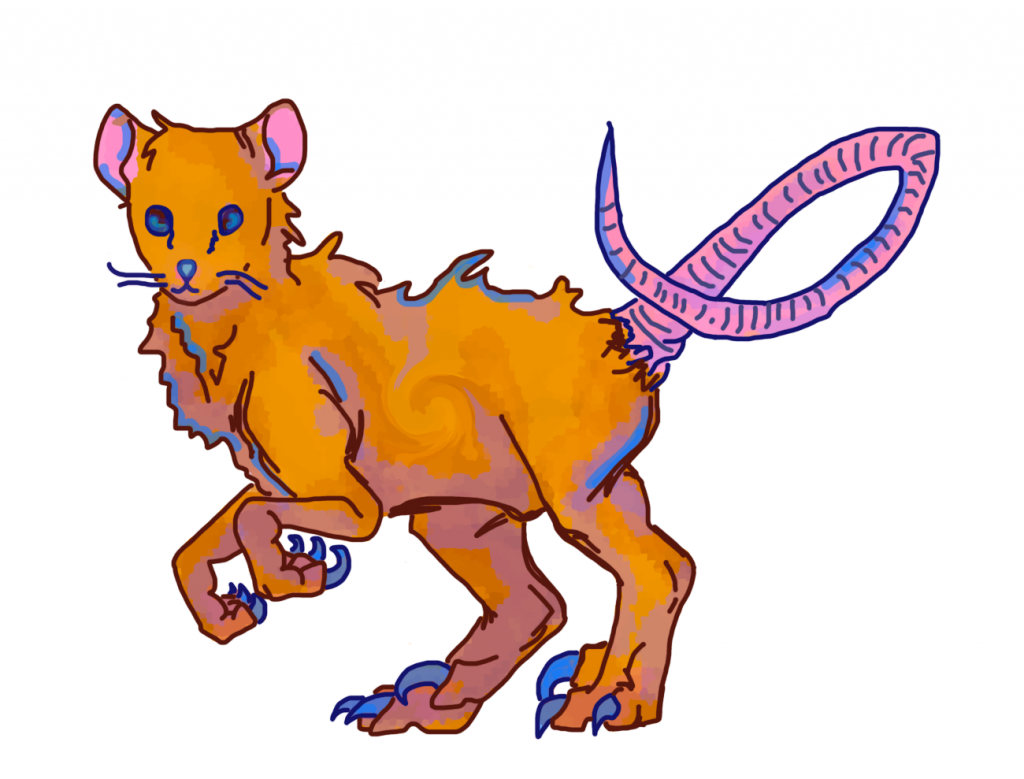