Are you afraid to talk about your salary? Serious question. Imagine telling the person who sits next to you at work how much you make. Comparing your stock options and benefits packages. Does the idea of that conversation make you nervous?

American culture stigmatizes open discussions of compensation, in the workplace as well as social settings. This harms laborers. Just look at Erica Baker’s experiment with salary transparency at Google. The company’s reaction was almost certainly illegal, but the only repercussion was moderately bad press. On the other hand, the employees who were discouraged from evaluating whether their salaries were equitable will be impacted for decades, if not for the rest of their careers. (I recommend Kara Swisher’s interview of Baker.)

“The fact is, companies are doing everything they can to increase their bottom line, and as such, they are actively trying to pay you as little as possible, with the understanding that if they underpay you too much, they will lose talent.” — Lauren Voswinkel in Model View Culture

People get uncomfortable when you choose to disclose the actual number of your salary. Those who share are judged as rude or feckless. I believe this is because salary disparities reveal unspoken power disparities — employees who get paid more are generally quite market-competitive, often because they have scarce skills. That means they have more power — they’re more valuable to the company in a very literal way, and they have more professional options outside of the organization. Having their place in the hierarchy revealed can make people squirm.

I have broadly decided to be transparent about my pay and financial situation because I don’t believe in keeping secrets for their own sake. Because having access to more information gives people more power, and redistributing information helps to redistribute power. I don’t believe that anyone is obligated to reveal these personal details if they don’t want to, but I do want to, and the information is mine to disclose.

Here’s an example of how salary-sharing can be useful: If you know that coworkers with comparable duties are being paid more (or less), you can go to your boss to find out why. You have more evidentiary material should you decide to advocate for changes, whether personal or systemic. It is illegal for employers to discourage this — either explicitly or implicitly. They often do it anyway because the consequence is a slap on the wrist.

Like most labor rights, these can’t be waived by signing a contract or an NDA. (Similarly, you can’t forgo overtime if you’re a non-exempt employee.) The National Labor Relations Act extends anti-pay-secrecy rights federally [PDF] to all non-supervisory employees who wish to discuss compensation information with their colleagues.

This is an essential labor protection, whether or not you want to unionize. The fact that management so often opposes pay transparency demonstrates that it gives employees an advantage — otherwise, why would bosses bother trying to squash those conversations? Cultural arguments fall flat; I have friends who definitely make more money than me, and it’s not an obstacle.

Disclosing your salary to others outside of the company is less clear-cut. David Peyerwold holds in Advising California Employers and Employees: 2015 Update that voluntarily disclosed salaries do not constitute trade secrets: 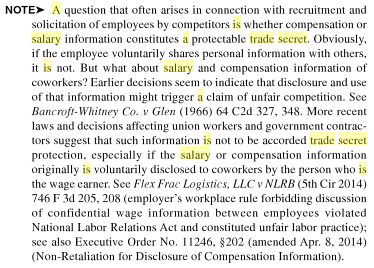 And the First Amendment Coalition seems to concur (unsurprisingly). However, a white paper [PDF] by lawyers Douglas Exeter and Valerie Park asserts:

“A company’s secret information about its ‘pricing, profit margins, costs of production, pricing concessions, promotional discounts, advertising allowances, volume rebates, marketing concessions, payment terms and rebate incentives … has independent economic value because [it] would be valuable to a competitor to set prices which meet or undercut’ their own.”1

Is this legit? Since I’m not a lawyer, I’m not sure. The Digital Media Law Project provides resources regarding what constitutes a trade secret in California and general claims of trade-secret misappropriation. Nolo also has an overview of trade secrets in California. Your mileage may vary…

Further reading for those who are interested: articles on NPR and The Atlantic.

1 Page 14 of the PDF. In the quote I pulled, Exeter and Park are citing Whyte v. Schlage Lock Co., 101 Cal.App.4th 1443, 1455 (2002). The white paper is distributed and copyrighted circa 2003 by Farella Braun + Martel LLP and Vaughan & Fleming LLP. Douglas Exeter is associated with the former firm and Valerie Park with the latter.